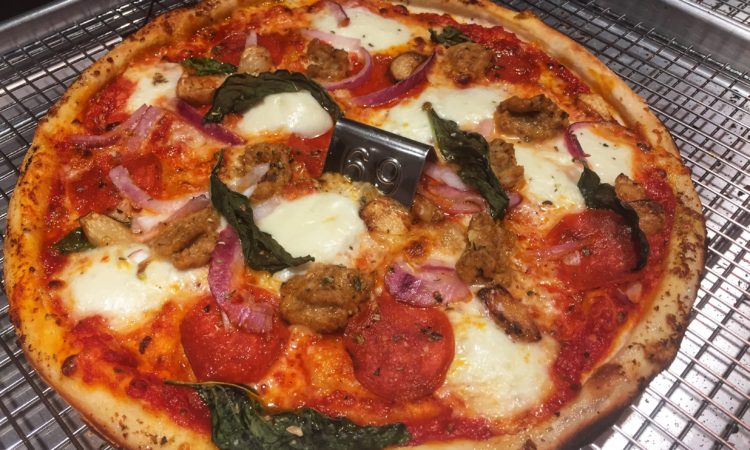 There are few things I adore more than pizza … Ok, maybe tacos. And pasta. And gelato. But I REALLY love pizza. It’s just one of those foods that makes everyone happy. It’s a complete meal you can hold in your hand: carbs, protein, dairy and veggies (yes I know tomato is technically a fruit). So when Blaze Pizza (you know, LeBron James’ pizza concept) reached out to me, inviting me to a VIP Media Taste Event for the grand-opening of their Scottsdale, AZ location, I knew this would be a gluttonously good time!

Blaze Pizza provided me with a complimentary meal. Regardless, all opinions, photos and text are my own. Please read my disclosure policy for more information.

When I arrived, I learned that I wouldn’t just be eating the pizza — I’d first be making the pizza! Now, I’ve made pizza several times before … most notably in a small village outside of Sorrento, Italy, when I enrolled in a 2-week culinary school in 2014. But the chef had to help me a lot, because I’m just not super skilled in the pizza making department. I had these grand visions of tossing the dough up into the air — but in reality it was nothing like that. The dough was stuck all over my hands and I looked like a kid who had a play-doh accident. Would this be my shot at redemption?

I was promptly handed an apron and escorted to the hand-washing station. Then, we moved over to the dough station — and much to my relief, I discovered the dough was already made for us. That’s because it has to proof (ferment) for 24 hours, so they made it yesterday. That’s right: They prepare their dough from scratch daily, so none of that frozen dough crap some of their competitors serve.

I was taught how to cut off a piece of dough from the massive slab, weigh it to ensure it was the right size, and then throw it into this awesome contraption that spit out a perfectly round ball of dough. Lo and behold it worked beautifully!

Next, we put the dough in another piece of equipment to flatten it and create a lip around the edge for the crust. Super cool that it does all the hard work for you (unlike my class in Italy where I had to roll it). Then, we placed it on a floured paddle and headed over to the sauce/cheese/topping stations.

This is where the real pizza making fun happens! I chose classic marinara for my sauce and ladled it on perfectly (or so Jake, the guy guiding me through the process said, but it’s quite possible he was just being nice). I added a little pesto sauce around the edges for good measure. Next, I placed shredded mozzarella and pieces of ovalini mozzarella on it, and some grated parmesan on top just in case (the more cheese the better, I always say). There were a ton of topping options, so I went with pepperoni, sausage, red onions, fresh basil and roasted garlic. They also had artichokes, olives, bell peppers, zucchini, and mushrooms, but I had to draw the line somewhere. I love that Blaze doesn’t use any artificial colors, flavors or preservatives in their products. Finally, I sprinkled on a dash of oregano and salt to finish off my masterpiece.

Bring on the Heat

This bad boy was oven-ready now, so I used the paddle board to shove my pie into the middle of the blazing hot oven (get it? Blaze!). It’s all in the flick of the wrist, and I totally nailed it. At that point, I decided to hand the reins over to their dedicated pizzasmith to move it around in the oven as needed and 180 seconds later, viola! My pizza was cooked to perfection!

You better believe I grabbed a table and dove right into that delicious ooey gooey pizza — I mean, I had worked up a sweat making it (not really). And it was absolutely delicious. The crust was light-as-air and crispy, the cheese was melty and the flavors of the toppings and marinara sauce all came together in perfect harmony. I could tell it had been made with love. Ha!

While I was on my third piece, Jake came over with a tray of desserts: S’more pie, a chocolate chip cookie with sea salt and a brownie. Each one was better than the next, though my vote goes to the S’more for sure.

This was such a fun and unexpected experience. While this pizza making event was a one-of-a-kind treat not open for the public, I have no doubt you’ll love having the Blaze Pizza pros make your pie for you. After all, they are the experts!

I can’t wait to go back and try new combinations of pizza sauces/cheese/toppings. Um, and another S’more please!