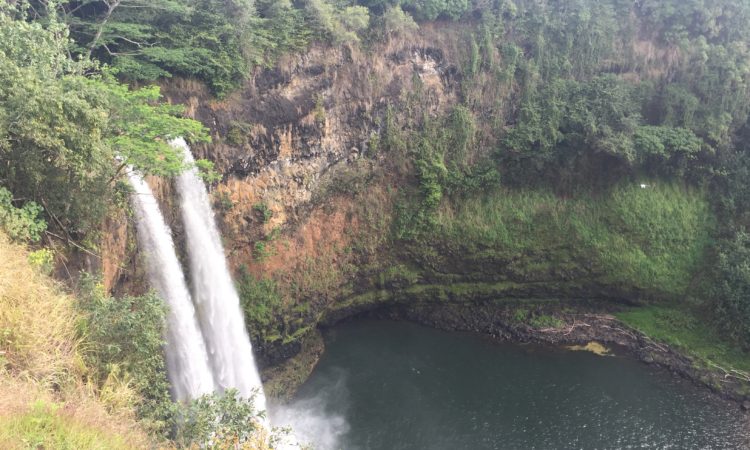 My dear friend Michelle moved to the gorgeous island of Kauai several years ago. She’d invited me to visit countless times … but life happened and it kept getting shoved further down on my list. I’d only been to Hawaii once before — on a family cruise in 1999 — and absolutely loved it. So why wasn’t I making this trip a priority?!

This past January, Michelle knew I was careening toward a crossroads in my life: I was busy building up my freelance writing business in hopes of leaving my soul-sucking corporate job behind. Being a true believer in Kauai’s divine feminine energy (similar to the vortexes in Sedona), she promised it would be the ideal place for me to begin planning for the next chapter of my life and insisted I come visit. So I finally said yes and booked a flight.

Moments after touching down in the Garden Island, as Kauai is known, Michelle whisked me off to a local treasure: Duke’s Canoe Club, situated on Kalapaki Beach. After indulging in a refreshing cocktail and shrimp and arugula salad from the Barefoot Bar, we took a walk along the beach. The beach bordering the magnificent Kauai Marriott Beach Club & Resort opens up to the crystal blue waters of Nawiliwili Bay and the Hoary Head Mountains beyond. Even though it was a chilly day by Hawaiian standards (low 70s), there were plenty of people swimming, surfing, playing beach volleyball, bodysurfing, windsurfing, and paddleboarding.

The next day, we took a drive down the luscious “Tree Tunnel” — an absolutely breathtaking canopy of Eucalyptus trees that line Maluhia Road, and create a natural gateway to Kauai’s South Shore. Here, you’ll find the towns of Koloa and Poipu, the latter being our immediate destination.

A few mornings each week, men and women gather at Waiohai beach for what Michelle has dubbed “Mermaid training.” You might know it as “water aerobics,” but when in Rome … er, Kauai. If you’re really lucky, Monk Seals or turtles will join your class. After our ocean-based workout (no wonder mermaids have tiny waists … this class was no joke), we lounged on the beach eating fresh pineapple and soaking in the tropical sun. The water here is so unbelievably clear; if I lived in Kauai, I’d make sure it was close to this beach.

Our next stop was Spouting Horn Beach Park, a fantastic lookout spot where you can watch a blowhole spout a plume of seawater into the air. Depending on the tide and ocean conditions, it can shoot 50 feet high (though it wasn’t nearly that impressive during my visit).

Now, one thing I haven’t mentioned yet is the abundance of feral chickens and wild roosters running around this island. Like, they are absolutely everywhere. And, as you might imagine, the roosters are quite territorial around their hens and natural cockfights break out on the regular. It’s quite a sight to see. And, if you’re immature like me, you’ll want to yell “Cock!” each and every time you see one. It never gets old.

In a Land Called Hanalei

The following day, we set off on a drive to Hanalei (you know, where Puff the Magic Dragon lived), a charming town on Kauai’s North Shore. Be sure to stop at the Hanalei Valley Lookout (east of town), where you can see the taro fields and mountains beyond. In town, you’ll find art galleries and boutiques, surf and bikini shops, and restaurants galore.

The crescent-shaped Hanalei Bay is set beneath a range of mountain peaks directly inland from the bay. The view to the west showcases the Wainiha mountain range and in the distance is the peak of Makana, which you may know as Bali Hai from the 1957 movie South Paciﬁc. Want to take a cool shot? Duck your head and crouch beneath the famous Hanalei Pier.

After grabbing lunch, we continued on to Ha’ena State Wilderness Park, where you’ll find the Waikapalae Cave, also known as the “Blue Room” because it glows with a striking blue light. The grotto made a cameo in the 2011 film, Pirates of the Caribbean: On Stranger Tides. Once you get here, you are on the northern-most coast (Ke’e Beach), quite literally at the end of the road, making this stop a fitting place to end the day’s journey. If you want to see the breathtaking Napali coast, you’ll have to hike, take a helicopter ride or go by boat (if you choose to hike, you’ll find the beginning of the world-famous 11-mile Kalalau Trail here).

For my last day in paradise, we took a ride to the Opaeka’a Falls. One of Kauai’s most accessible major waterfalls, this 151-foot-tall, 40-foot-wide waterfall cascades down into a hidden pool. Walk uphill from the Opaeka’a lookout and across the road for another great view of the Wailua River Valley (Hawaii’s only navigable river) and interior plains beyond.

And because we were on a waterfall roll, we also stopped at the Wailua Falls, a 173-foot waterfall located in Lihue that feeds into the Wailua River. You might recognize it from the opening credits of the television series Fantasy Island. Bonus for those of you who have a flip-flop fetish like me … there’s no hiking required to experience this picturesque Hawaiian waterfall.

On my last night, we went back to Duke’s for its famous Hula Pie, which is an absolute must-eat treat: macadamia nut ice cream piled high on a chocolate cookie crust and topped with chocolate fudge, whipped cream, and more macadamia nuts. Just don’t go with Michelle … she hogs the chocolate fudge and makes no apologies for it.

It was a whirlwind trip, jam-packed with nearly every highlight the island has to offer — you’d think I would have been exhausted by the time my tour guide took me back to the airport. But no … I felt nothing but invigorated on my flight home. I truly believe Kauai’s magical energy allowed me to tap into my creativity and finally take action on a plan I’d dreamt about for years. I even used the long flight to read a book that further empowered me to stop second-guessing myself — and I quit my job a few months later to be a full-time freelance writer. When I landed, I vowed to never again let another 18 years come between me and Hawaii.